One of the manuscripts in the Arnamagnæan Collection in Copenhagen that may be connected to Magnús Jónsson í Vigur is Rask 33, the majority of which was copied by Magnús í Vigur’s scribe Þórður Jónsson, in 1680. Þórður’s copy of the romance Mágus saga jarls is decorated in a similar manner to many of the other sagas copied for Magnús í Vigur, and it seems very likely that this saga was also intended for him. 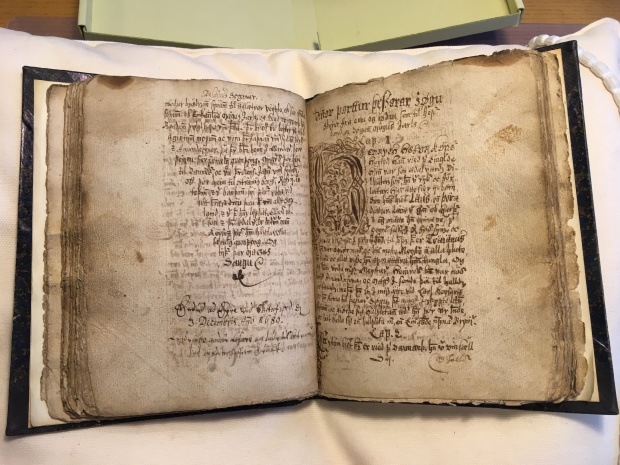 This manuscript was not part of Árni Magnússon’s original collection, but was added to the collection in the nineteenth century after the death of the Danish linguist Rasmus Rask (1787–1832), along with over 100 other Icelandic manuscripts that he had owned. How the manuscript eventually made its way from the Westfjords of Iceland where Þórður copied it to become part of Rask’s collection is unknown, although the name of a previous owner, Ólafur Ólafsson, was written several times along with two place names and dates – Jódísarstaðir and Ánastaðir – and three dates – 1794, 1798, and 1811.

I wrote about this manuscript for the Arnamagnæan Institute’s Manuscript of the Month (Månedens Håndskrift) series in August 2017; you can read more about it on their website, in English (manuscript.ku.dk) or Danish (haandskrift.ku.dk):